Welcome to Summer get out and have some fun!
Here are a few things to keep the kids busy.
All Summer Regal theaters are offering $1 shows of G-and PG rated movies at 10am on Tuesdays & Wednesday’s. Including Alderwood stadium 7, Auburn Stadium, Crossroads Stadium and more. For full list and schedules
All Summer Kids Bowl Free! – Sign up and get vouchers for two free games of kids bowling every day, all summer long. Participating centers in Edmonds, Everett, Kenmore, Lakewood, Puyallup, Seattle and more.
All Summer Get movin and ride that bike! The city of Seattle will be shutting down the 4-mile stretch of Lake Washington Boulevard between Mount Baker Beach and Seward Park to all motorized traffic between 10am and 6pm on several Sundays. See schedule of which Sundays.
All Summer If you haven’t checked it out yet Mukilteo’s farmers market is in full swing. Wednesday’s 3pm-7. Or Snohomish Willis Tucker Park on Friday’s.
I’ve been told its pretty easy parking right now but come July its gets really busy. Other great Farmers markets around in Downtown Everett and Mill Creek that I posted in a previous post on this blog and if you cant find my Word Press blog. if you missed it take a look.
Its Not all About Real Estate in Snohomish County we have to have fun too!
http://www.snohomishcountyhomes4u.com 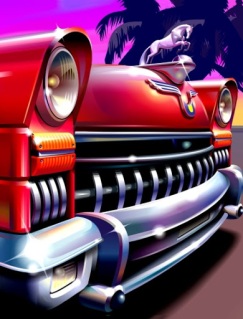 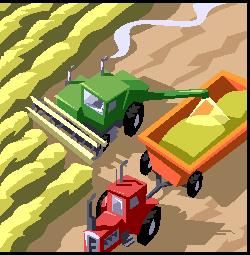 To All You Great Fathers, Dads and Grandpas enjoy your day!

Here is a Fun Card just for you to start it off and my top 10 ideas for a great Fathers Day outing in the sunshine.

Country Village Father’s Day Car Show  Jun 16 at 12:00 pm to 3:00 pm.  Bothell Country Village, 23718 Bothell Everett Highway-more info: visit website.  Take Dad to Country Village for a super-fun day filled with fab cruzin’ machines! Bring your vintage auto or just come and enjoy the show. Participation in the show, as well as entrance to view the amazing vintage cars is always free on Father’s Day. Plus, the first 100 registrants receive a commemorative dated dash plaque to add to their collection!

Father’s Day at Museum of Flight- Jun 16 at 10:00 am to 5:00 pm. where: Museum of Flight, 9404 East Marginal Way South- cost: Free with admission or membership. The Museum of Flight is honoring dads this Father’s Day with an entire day of family-friendly activities and events, making it the perfect place to go (even if you have to go to brunch first!). The museum is open from 10:00 am – 5:00 pm on Father’s Day and a visit is especially a good idea if you have grandparents or family members in town to celebrate – it appeals to every age and you don’t have to be obsessed with planes to enjoy yourself here.

Plus, Dan “The LEGO Man” Parker will have his interactive Play Zone set up in the Great Gallery (starting at 10:00 am) for anyone to come by and play! And in the afternoon, dad can meet famous NASA astronaut Michael Foreman and get his autograph.

MOVIE- If none of those sound good to Dear Ol’ Dad how about a movie?  The Man of Steal, Fast and Furious and Star Trek Into Darkness look pretty darn good!  A bit of advice from a mom~  You stay home and just let the kids take Dad to the movies and as soon as their gone pour a glass of wine and do nothing for a few hours or just enjoy a great girly movie. A bit of Mother’s Day on Father’s Day? Why not? After all how many of us Mom’s end up cooking, cleaning and everything else on our day? 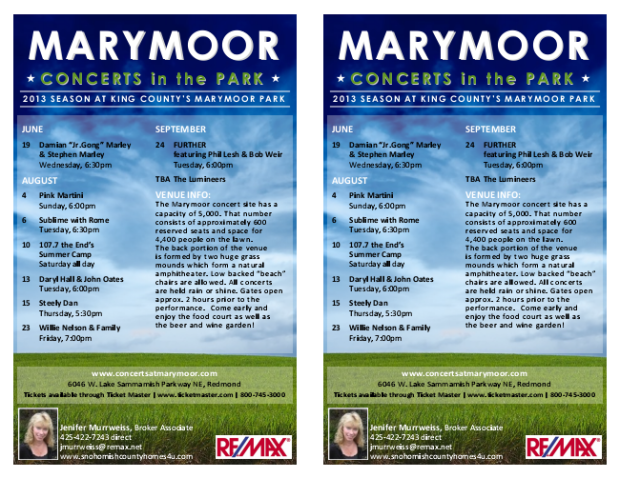 Marymoor Concerts in the Park

Take A look at this incredible video and see for yourself.  Mill Creek Home For Sale 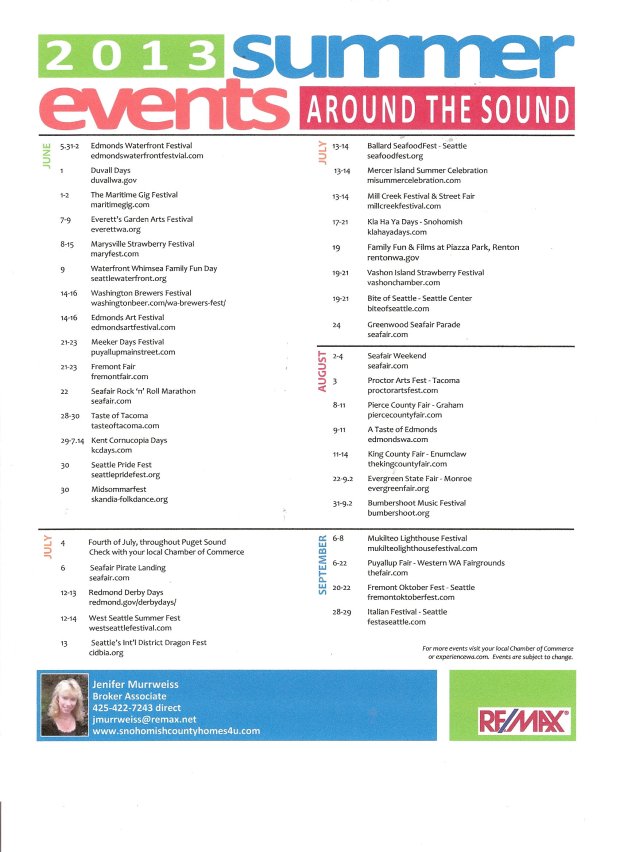 Commenting on the latest report, brokers said the fast pace is frustrating some buyers — and surprising sellers with unrealistic expectations. One broker cautioned against an overheated market. “We do not want a market that escalates too fast and topples again,” commented Frank Wilson, Kitsap district manager at John L. Scott Real Estate and branch managing broker for its Poulsbo/Kingston office.

With inventory apparently improving, some would-be buyers are staying on the sidelines. The increased inventory is “cooling some buyers,” reported George Moorhead, managing broker at Bentley Properties in Mill Creek and a member of the MLS board of directors. “We also have buyers who are stepping back as they are frustrated with current inventory and multiple offers going well above asking price,” he added.

Inventory showed signs of improving with the addition of 11,445 new listings during May, the highest number since April 2010. May’s total outgained the year-ago figure of 9,861 new listings for a 16 percent gain.

“It has been refreshing to see more listings coming on the market, but with overall inventory remaining low the competition among buyers is still fierce for homes that are priced properly,” commented Estey.

At month end, there were 21,943 total active listings in the Northwest MLS database, a drop of 4,248 from the same time a year ago for a decline of more than 16 percent.

Buyers looking for condominiums will find slim pickings. Condos currently account for only about 10 percent of the available inventory. The area-wide selection, which numbers 2,253 listings, is down more than 26 percent from a year ago.

Most metro area counties had more modest gains in pending sales: King (up 6 percent) Snohomish (down 5.8 percent) and Pierce (up 10.6 percent).

Closed sales continue to track well ahead of a year ago. During May, members tallied 7,349 completed transactions, outpacing the year ago total of 6,027 by nearly 22 percent.

Prices jumped 13.4 percent from twelve months ago, rising from an area-wide median selling price of $242,500 to last month’s price of $275,000. The median price for homes and condos that sold in both King County and San Juan County was $375,000 ($100,000 higher than the area-wide figure). In King County, that represented a gain of 15.4 percent, while for San Juan County prices edged up only about 1.8 percent compared to a year ago.

“We’re seeing the trajectory of home prices beginning to soften and the number of days on the market decline,” observed Mike Grady, president and COO of Coldwell Banker Bain, adding, “The trends suggest inventory levels are slightly more sustainable, but we’re still clearly in a seller’s market. For the foreseeable future, buyers will continue to pay more the longer they wait to purchase a home.”

Frank Wilson, who is also a board member for Northwest MLS, said recent market activity is affecting home values. In Kitsap County, where his office is located, brokers added 575 new listings to inventory during May, improving on the year-ago total of 515. During the same period, MLS members reported 567 pending sales to soar past the year ago figure of 414 sales for an increase of nearly 40 percent. Median selling prices in Kitsap County rose 5.3 percent, from the year-ago figure of $228,000 to $240,000.

“Slow and steady is the key here,” Wilson cautioned, while also raising concern about low appraisals, which he described as the “inchworm effect” of the market. “As prices begin to appreciate we will continue to see challenges with low appraisals,” he predicted.

Moorhead said increased activity is very noticeable, with mixed outcomes. “We are seeing multiple offers at 5-to-12 percent over list price in highly sought-after areas,” he reported, but also noted “there are other homes on the market that are not selling with no real reason why.”

Wilson said the biggest effect of the upswing in the real estate market has been the erosion of a buyer’s buying power. In May alone, interest rates jumped almost 0.75 percent, he noted, which reduces a buyer’s ability to purchase a $350,000 home by almost $31,000. Coupled with an increase in price, he said it “creates a compounding affect, which will frustrate buyers in today’s market.”

Estey said interest rate increases are “adding fury to the already frenzied buyers who must finance their purchase.”  A one-half percentage point increase in interest rates reduces buying power by 5 percent, she explained, adding, “so as prices increase about a percentage a month, the feeling of urgency mounts too.”

Commenting on the challenges buyers are encountering, Estey said, “The joy of buying a home in today’s market is in the long-term result of settling in, but the competitive process is sometimes not so joyful! Hiring the right broker who can add some fun elements and insights while wisely guiding buyers through the decision process can make a huge difference,” she suggests.

Federal officials are downplaying rising interest rates. In a recent interview, Frank Nothaft, Freddie Mac’s chief economist, commented on the latest rise that marked three consecutive weeks of increases. “While this may slow some of the refinance momentum, rates are nonetheless low and home-buyer affordability high, which should further aid home sales and construction in coming weeks,” he remarked, adding, “The rates are also lower today than they were a year ago at this time.”

Northwest Multiple Listing Service, owned by its member real estate firms, is the largest full-service MLS in the Northwest. Its membership includes more than 21,000 real estate brokers. The organization, based in Kirkland, Wash., currently serves 21 counties in Washington state.

__________
Copyright © 2013 Northwest Multiple Listing Service
ALL RIGHTS RESERVED
This material may not be copied, published, broadcast, rewritten or redistributed without prior permission. 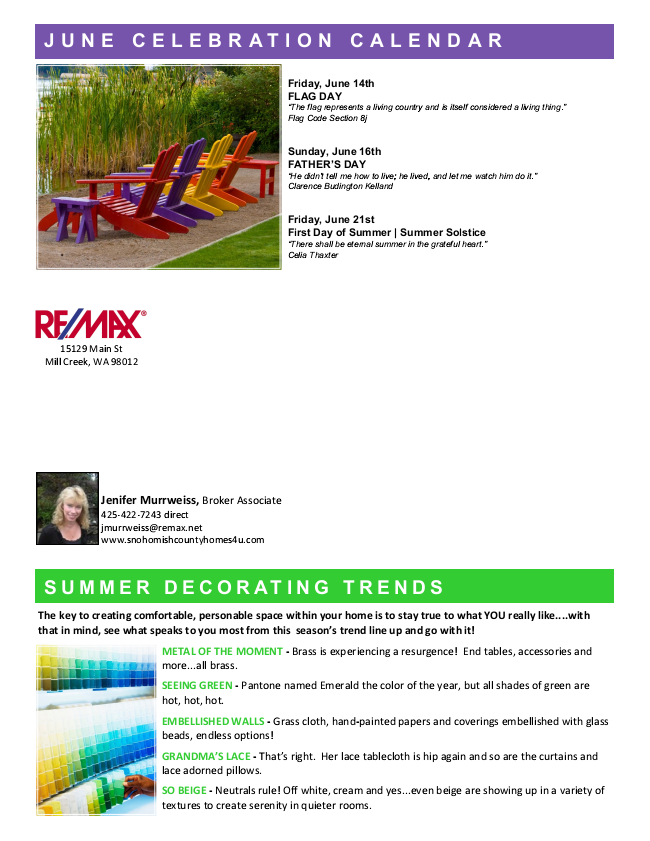